Cassiopeia or Cassiepeia is the name given to several characters in Greek mythology. However, one is prevalent in the myths of ancient Greeks.

Cassiopeia, the queen of Aethiopia, was the wife of King Cepheus, daughter of Coronus and Zeuxo. Very beautiful and vain, she committed hubris by saying that she and her daughter Andromeda were more beautiful that the daughters of the sea god Nereus, called the Nereids. As a result, Poseidon was infuriated and sent the sea monster Cetus to plague the coasts of Aethiopia. According to other sources, he did not send a monster, but caused the lands to flood. Consulting an oracle, Cepheus and Cassiopeia had to sacrifice Andromeda in order to appease the wrath of Poseidon; they chained her daughter to a rock next to the sea as a sacrifice to Cetus. However, Perseus managed to save her and kill the beast; he then married Andromeda. Unhappy that Cassiopeia was not punished, Poseidon tied her to a chair in the heavens, so that she would revolve upside down half of the time. This is how the constellation took its name, resembling the torture chair that was used for Cassiopeia's punishment.

Cassiopeia or Cassiepeia is the name given to several characters in Greek mythology. However, one is prevalent in the myths of ancient Greeks. 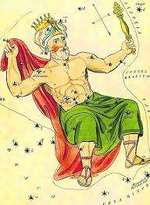