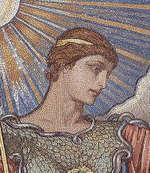 Broteas was a hunter in Greek mythology, son of Tantalus and Dione, and brother to Niobe and Pelops. It was believed that he was the person that carved the oldest image of Cybele, the Great Mother of the Gods, near the Mount Sipylus. The image depicts the goddess in a sitting position, holding her breasts, while Hittite hieroglyphics were carved in an area to the right of her head. The myth has it that Broteas died by putting himself on fire as sacrifice, after refusing to honour Artemis, the goddess of hunting. As a result, the goddess drove him mad and made him kill himself.

Who were the parents of Broteas?

The parents of Broteas were Tantalus and Dione.

Tweet Share 0
Link/cite this page
You can freely use the content on this page for non-commercial reasons (homework, lessons, school or college projects, free online courses) as long as you cite this page as the source. For online citation use the code below:
<a href="https://www.greekmythology.com/Myths/Mortals/Broteas/broteas.html">Broteas: GreekMythology.com</a> - Jul 14, 2020
For offline citation use: Broteas: GreekMythology.com - Jul 14, 2020