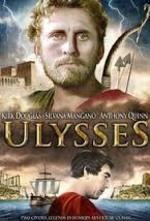 Ulysses is a fantasy film that is based on the Homeric epic Odyssey. It was directed by Mario Camerini, and was originally released in 1954. The cast includes names such as Kirk Douglas, Silvana Mangano, Anthony Quinn, Franco Interlenghi and Rossana Podesta. Kirk Douglas portrays the eponymous hero Ulysses or Odysseus, while Silvana Mangano plays two different roles; the one of the hero's faithful wife, Penelope, and that of the sorceress Circe. Anthony Quinn portrays Antinous, and Rossana Podesta plays the role of Nausicaa. The story follows Ulysses as he tries to return back to his home in the island of Ithaca, after the end of the Trojan War.

Link/cite this page
You can freely use the content on this page for non-commercial reasons (homework, lessons, school essays or college projects, free online courses) as long as you cite this page as the source. For online citation use the code below:
<a href="https://www.greekmythology.com/Myths/Movies/Ulysses/ulysses.html">Ulysses 1954: GreekMythology.com</a> - Mar 02, 2021
For MLA style citation use: “Ulysses 1954.” GreekMythology.com, Mar 02, 2021, https://www.greekmythology.com/Myths/Movies/Ulysses/ulysses.html
✍ Need professional help on your Ulysses 1954 assignment? Click here!
Share Tweet YouTube
X