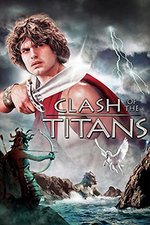 Clash of the Titans is a fantasy film directed by Desmond Davis that was originally released in 1981. The cast includes names such as Harry Hamlin, Judi Bowker, Maggie Smith and Laurence Olivier. The plot revolves around the story of the Greek hero Perseus.

In the film, King Acrisius of Argos imprisoned his daughter Danae. While in prison, Danae was visited by Zeus, and impregnated her; when Acrisius found out, he sent Danae and the newborn Perseus to the sea into a wooden chest. Zeus, infuriated with Acrisius' actions, killed the king and told his brother Poseidon to release the Kraken, the last of the Titans, so it would destroy the city of Argos. Danae and Perseus reached the island of Seriphos, where Perseus reached adulthood.

The son of the goddess Thetis, Calibos, was engaged to Princess Andromeda, heir of the throne of Joppa. Having destroyed the nearby area with his actions and killing most of the sacred horses of Zeus, Calibos was turned into a satyr by the god. As revenge, Thetis transported Perseus to an abandoned place in Joppa, where he learned that Andromeda could not marry unless her suitor would successfully answer a riddle. Perseus confronted Calibos and then managed to solve the riddle, taking Andromeda as his wife. Calibos asked Thetis to punish Perseus, but she was unable to inflict pain on him; so instead, he demanded that Andromeda be sacrificed to the Kraken.

Perseus was told that to kill the Kraken, he needed the head of the gorgon Medusa and planned an expedition to the Gorgon's island. There, he managed to kill Medusa and collect her head. After a few setbacks, Perseus managed to return to Jobba just in time to petrify the Kraken using Medusa's head. The Kraken was then dissolved into the sea, and Perseus managed to save Andromeda and marry her.

Clash of the Titans 1981 Associations Link/Cite Clash of the Titans 1981 Page