Croesus was the last king of Lydia, proverbial for his enormous fortune; even nowadays, many Romance languages use the expression “as rich as Croesus” to describe a fabulously wealthy person. Solon, on the other hand, was one of the Seven Sages of Greece, the philosopher-statesman who first laid down the laws which consequently shaped the Athenian democracy. The former was known for his self-confidence and excesses; the latter for his reservation, dignity, and wisdom.

It so happened that soon after Croesus conquered almost all of the nations in what is today known as Anatolia (Asian Turkey) – and was at the very height of his power – Solon visited him at his palace in Sardis. The philosopher had recently finished his reforms in Athens, and so that the vow-bound Athenians could not force him to repeal any of them, he had embarked on a journey around the world.

Knowing full well the reputation of his esteemed guest, Croesus entertained Solon for at least two nights and ordered his attendants to show him around his treasures on the third day of the visit. Not that there was any reason for that: Solon was quite aware of Croesus’ extravagant wealth, if merely because in Sardis even the temples for the gods were built of gold.

The Happiest Man in the World

However, Solon wasn’t impressed in the least bit by all this splendor; and he seemed even less fascinated by the achievements of his host.

“How can you not be?” – asked the annoyed Croesus eventually. “Have you, on some of your travels, encountered upon someone more fortunate than me? Indeed, my Athenian friend, as one who loves learning and who has traveled much of the world for the sake of seeing it, tell me whom you consider to be the happiest man in the world?”

Solon was famous for his integrity, so he offered no flattery:

“How so?” replied sharply the amazed Croesus, who had been confident that Solon would name none other than himself.

“Well,” Solon said, “Tellus was neither rich nor poor, and all of his children were good and noble; he lived to see them give birth to their children and died an old and respected man while volunteering to fight for his country.”

Not entirely pleased with the answer, Croesus then asked Solon who he thought was next, to which Solon, after some thinking, replied:

“It has to be Aglaus. The man was so happy living on his farm that he never even felt the need to leave it. And that’s where he died, admired by his friends and surrounded by his loving family.”

“And what about third?”

“Cleobis and Biton, mighty king. They were healthy and beloved youngsters who always had enough to live on. One day, after the oxen of their mother Cydippe went missing, they yoked themselves to the cart and drove their mother for five miles until reaching the temple of Hera, where Cydippe, a priestess, was headed to honor the goddess at a religious festival. Overjoyed and proud, Cydippe asked Hera to bestow the best gift upon her children. She did: they lay down in the temple and died peacefully in their sleep just moments after. They are still fondly remembered for their strength and devotion.”

The Moral of the Story

“You perplex me, my Athenian guest,” cried the displeased Lydian king. “Do you despise my happiness so much that you consider me less worthy than these common men?”

“Oh, no, Croesus,” replied Solon. “I’m just saying what I know to be true. You seem to be rich beyond comprehension, and I’m sure that, at this moment, no man can fulfill more of his fantasies than you can in the whole wide world. However, I’ve seen people just as rich as you die more disgraceful deaths than the commonest and poorest of all men. Because, Croesus, man is entirely chance, and nobody knows what the gods may bring tomorrow. You should count no man happy until he dies.”

Solon’s words did not at all please Croesus, which is why the king sent the sage away without regard for him, thinking Solon either a great fool or an even greater liar.

And in few days’ time, Croesus completely forgot about Solon.

The Subsequent Fate of Croesus

But not long afterward, Croesus’ son went hunting and wounded himself by a mischance; the day he died of the wound, Cyrus the Great, the powerful Persian king, attacked Croesus’ kingdom. Cyrus’ soldiers penetrated to the capital and captured Croesus at his palace. They built a great pyre on the city square of Sardis and bound the once-mighty king to it, setting it on fire afterward.

As the flames started engulfing him, Croesus tried to imagine what people will say of him after his death; and, bursting into tears at the unpleasant thoughts, he suddenly remembered Solon’s wise advice, and, almost too late, cried out loud:

Intrigued by the meaning of these words, Cyrus ordered that the fire be put out and Croesus be taken of the pyre; and after the defeated king was brought to him, Cyrus immediately inquired of the meaning of Croesus’ cry.

“I was just naming the name of a wise man,” replied Croesus, “one who revealed to me a truth worthier than all of our riches and glory.”

And then Croesus told Cyrus the story we’ve recounted here. It is said that Cyrus the Great was so moved by it that he pardoned Croesus and spent the rest of his life as his friend.

This story was first told by Herodotus in his Histories; in Roman times, it was retold – with few enhancements – by Ausonius in The Masque of the Seven Sages; for a modern retelling (told from a Christian perspective), you can read Leo Tolstoy’s short story “Croesus and Solon.” Our version above is an amalgam of the three but is mostly based on Herodotus’ account. 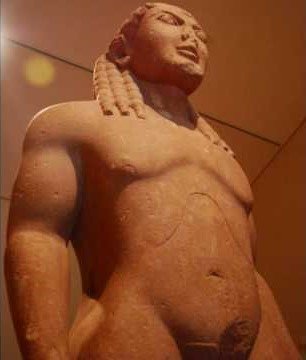