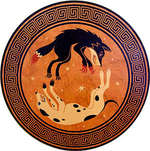 The Teumessian fox was an animal in Greek mythology that always evaded its hunter. According to a myth, it was sent by a god, possibly Dionysus, to punish the city of Thebes for a crime the people had committed. Eventually, Creon, the regent of the city, told Amphitryon to catch and kill the fox, who had the idea of bringing the dog Laelaps in his aid; Laelaps was able to catch whatever prey it was after. Thus, a paradox was created; a fox that could never be caught was hunted by a dog that caught everything it hunted. Zeus, seeing that the hunt would continue for an eternity, turned both animals into stone and then into constellations; Laelaps became the constellation Canis Major, and the Teumessian Fox became Canis Minor.

Tweet Share 0
Link/cite this page
You can freely use the content on this page for non-commercial reasons (homework, lessons, school or college projects, free online courses) as long as you cite this page as the source. For online citation use the code below:
<a href="https://www.greekmythology.com/Myths/Creatures/Teumessian_fox/teumessian_fox.html">Teumessian fox: GreekMythology.com</a> - Jul 11, 2020
For offline citation use: Teumessian fox: GreekMythology.com - Jul 11, 2020