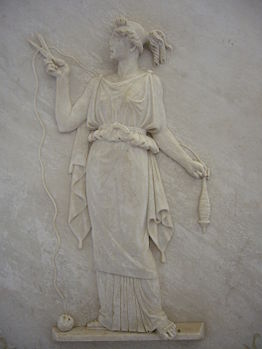 Atropos was one of the three Moirai in Greek mythology, goddesses who decided the fate of every human that lived on the earth. Atropos, along with her sisters Clotho and Lachesis, were considered to be the daughters of Zeus and Themis, the goddess of divine law; other sources mention that they were the offspring of the primordial goddess Ananke (necessity). The Moirai, or Fates, controlled the destiny of every living mortal and it was thought that even Zeus was subject to their will, unable to change it; in a few myths, however, Zeus was named "Moiragetes", i.e. controller of the Fates.