Hecate was a goddess in Greek mythology, considered to be the goddess of magic and witchcraft. She was often depicted holding two torches or a key. She was the daughter of the Titans Perses and Asteria, and she was honoured in the households as a protective goddess who brought prosperity.

Hecate was a cathonic goddess that preceded the Olympians, and it seems that she was highly worshipped in Thrace. She was also closely associated to the spiritual world, ghosts, and the dead. A shrine to Hecate was placed at the entrances of homes or even cities, hoping to protect them from the evil spirits that roamed the world.

She also helped goddess Demeter in her search for her daughter Persephone, when the latter was abducted by Hades, god of the underworld; after it was decided that Persephone would spend a third of a year in the underworld and the rest on earth, Hecate became Persephone's companion to and from the underworld each year.

In art, she was initially depicted as being a single figure. However, in later periods, statues depicted her as three-fold, having three faces and three bodies united.

Hecate was a goddess in Greek mythology, considered to be the goddess of magic and witchcraft. She was often depicted holding two torches or a key.

Who were the parents of Hecate?

The parents of Hecate were Perses and Asteria. 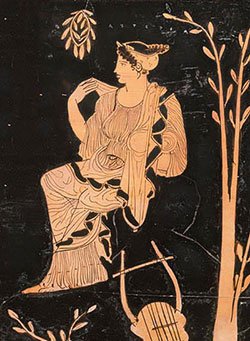