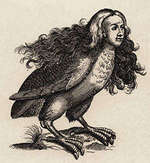 The Harpies were mythical monsters in Greek mythology, having the form of a bird and a human face. They carried evildoers to be punished by the Erinyes.

Zeus had given the gift of prophecy to King Phineus of Thrace, who used it to uncover the secret plan of the god. Angry, Zeus blinded him and put him on an island, where there was a lot of food; however, Phineus could not eat anything, because the Harpies would steal his food before he could eat it. Years later, Jason and the Argonauts arrived at the island, managing to drive the Harpies away. The Harpies escaped to their cave in Crete, while Phineus helped the Argonauts by telling them how to pass the Symplegades rocks.

The Harpies were also seen as the personifications of the destructive winds. Initially, two harpies were mentioned; Aello (storm swift), and Ocypete (swift wing). Later, a third was added, named Celaeno (dark).

Tweet Share 0
Link/cite this page
You can freely use the content on this page for non-commercial reasons (homework, lessons, school or college projects, free online courses) as long as you cite this page as the source. For online citation use the code below:
<a href="https://www.greekmythology.com/Myths/Monsters/Harpies/harpies.html">Harpies: GreekMythology.com</a> - Sep 17, 2020
For offline citation use: Harpies: GreekMythology.com - Sep 17, 2020