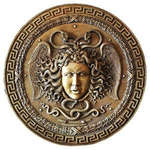 The aegis is a shield carried primarily by Zeus in Greek mythology, which he sometimes lent to Athena. According to other sources, it was not a shield but rather an animal skin worn over the garments of the gods as extra protection. It bore the head of a Gorgon and made a terrible roaring sound during the battle. The aegis was forged by the Cyclopes in Hephaestus’ forge, and had golden serpent-like scales and a Gorgon’s head rolling its eyes. In some texts, it was mentioned that when Zeus would shake the aegis, clouds would cover Mount Ida and men would hide in fear.

In Greek, the word aegis has various meanings, including a violent windstorm, a divine shield, and a goatskin garment.